It has been a long time, but this Supreme Court challenge, which began in April 2014, is finally over.  The Supreme Court accepted the discontinuation of the case agreed to by both parties on Friday 17 July 2015.

This courageous case was enormously important in the community battle against the deeply flawed East West Link project.

Once again our deepest gratitude goes to Anthony Murphy and his extraordinary, talented and community-minded legal team: Ron Merkel QC, Melinda Richards SC, Julian Burnside AO QC, Simona Gory Barrister, Meghan Fitzgerald, Hollie Golding and all the staff at Fitzroy Legal Services, Paula Shelton and others from Shine Lawyers, and the many other experts, volunteers and community members who helped behind the scenes.

It is a rare and brave thing for a person to take a State Government to court.  It is even rarer to win.  While the case may not have won in a court of law, it won in the court of public opinion and achieved what it set out to do – expose the flawed business case.  Through this case Victorians were made aware of, and became concerned about, the lack of transparency in spending huge amounts of state funds.  This brought the East West Link front of mind in the run up to the election, and played a vital part in the outcome.

In that sense, the Murphy case set a precedent. Communities can have a strong voice, especially when they are represented by such talented and good people as they were in this case.  We thank all those who supported this case – without you it would not have been possible to call the government to account, and eventually have the business cases released.

Funds raised were used to pay court costs and disbursements, and leftover funds were donated to Fitzroy Legal Services in recognition of their hard work over the many months of this case.  They have many friends and may they continue to help those who need it for many more years.

Apologies for the late update but so much has happened since our last update! The election of the new Labor government means that our fight to obtain the documents has been made much easier.

On 22 October Murphy returned to the Supreme Court for a hearing that centred on the question of disclosure of documents.  The State pressed its claim for non-disclosure, arguing public interest immunity.

The hearing lasted a day.  At the end, the judge said he would make his decision at a later date.

In the meantime of course, there was the election, which changed everything because Premier Andrews had committed to releasing the business case documentation, which formed the bulk of what the Murphy case was attempting to obtain.

Consequently, on Friday 5 December the judge called both parties to the court to discuss the changed circumstances.  Given that the new Andrews’ Ministry was only sworn in the day before, the Victorian Solicitor General sought additional time to obtain instructions. The judge gave them a week.

So back we came on Friday 12 December.  At that hearing the State and the LMA, with agreement from Murphy, sought approval to withdraw their earlier summons objecting to disclosure of the documents, and the State clarified that it was no longer pressing its claim to public interest immunity.  The two sides agreed that the documents sought would now be released (with exception of the contract between the Government and the East West Consortia which the Government also intends to release to the public soon) .

The judge agreed to this course of action on Monday 15 December. The same day, Premier Andrews made good his promise to release the business case documents (some 9000 pages!).  These documents can be found here.

It was agreed that we would be back in court on Friday 13 February to address the rest of the case.  What happens at this hearing will depend to a large extent on whether the East West Link has been finally put to rest.

The Murphy case was an integral part of the campaign to expose the East West Link project as a flawed and secretive process that denied all Victorians the information that they should have had to assess whether the project should proceed.  It sought a standard of transparency that we all have a right to in a properly functioning democracy.  It firmly championed the rights of the people to know what their government is doing and why.

Substantial transparency has now been achieved for the East West Link project with the release of the business case documents on Monday 15 December.  Let us hope that the Murphy case has also made it clear to all governments that they cannot in future proceed to develop and implement major projects in the way the East West Link was developed and implemented.

A further update will be provided after the hearing on 13 February 2015.

Once again, our sincere and heartfelt thanks to Anthony Murphy for his willingness and commitment to bring this case to the courts, to the extraordinary, generous and dedicated legal team comprising Ron Merkel QC, Melinda Richards SC, Julian Burnside AO QC, Simona Gory Barrister, Meghan Fitzgerald, Hollie Golding and all others from Fitzroy Legal Services, Paula Shelton and others from Shine Lawyers, and the many other experts, volunteers and community members who helped behind the scenes. You gave hope and confidence to so many who felt that the might of government and business interests was against them but wanted and needed to fight for what is right. We can’t thank you enough.

And last but not least a huge thanks to all those who have been supporting this case with their donations and behind-the-scenes help!

Following a successful appeal, Anthony Murphy returns to the Supreme court on 22 October.  This hearing is to consider the disclosure of documentation in relation to the business case, and the State’s request for public interest immunity.  The hearing is likely to go for 2 days.

Details of time and court will be available from the Supreme Court Daily List published after 3pm on the day before the hearing.

For donations to the Murphy legal challenge please go to:

We would like to say a huge THANK YOU to all our donors to date, who have been so generous in their support. It means so much to Anthony and the legal team to be supported by such committed and generous people.

Your continued support is important and appreciated – please help spread the word!

The week beginning Monday 22nd September was a week of high drama in the Murphy case! The appeal against the original decision that the government could not be found to have engaged in misleading and deceptive conduct ran over three days before three judges. Their decision was handed down at 10am on Monday 29th September in Anthony Murphy’s favour. The appeal judges found that the appeal must be allowed, and that the case would be remitted to a different judge of the Supreme Court for hearing.

This is important because Anthony Murphy will now return to the Supreme Court to argue for the release of the business case in order to determine whether or not the State government and the Linking Melbourne Authority engaged in misleading and deceptive conduct about the economic justification for the East West Link. It is an important case for potentially setting a standard of transparency and accountability in government.

It is not certain yet when the case will be heard, but we will let you know as soon as a date is set. 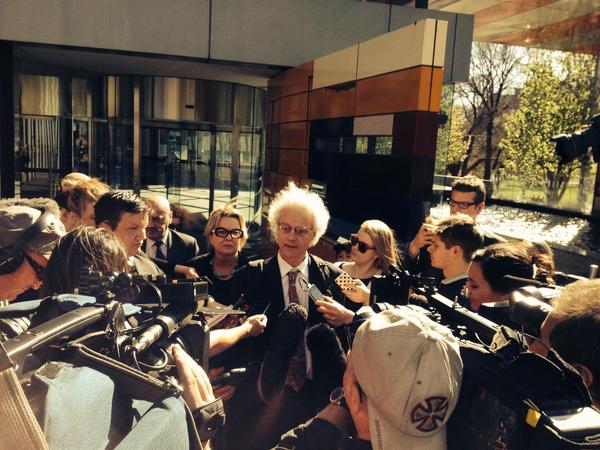 As part of the appeal, two injunctions were sought: to stop the contracts from being signed, and to stop the compulsory acquisitions from going ahead. The appeal court had ruled separately on these injunctions on Wednesday 24th September, and refused to grant the injunctions. This decision was subsequently appealed to the High Court, and a hearing was held at the High Court at 11.30am Monday 29th September – just an hour after the appeal decision was handed down! A lot of hard work was put into this by Anthony’s committed legal team led by Ron Merkel.

Justice Susan Crennan of the High Court gave serious consideration to the request that these injunctions be ordered in the interim, pending a hearing at the High Court set down for 17th October. The State, the Linking Melbourne Authority and the East West Connect consortium all made representations to Justice Crennan about the financial losses that would be incurred if contracts could not be signed. Ron Merkel QC for Anthony Murphy put a strong and compelling case for the public interest, and the loss to the public purse if contracts were to be signed. The judge ultimately found in the State’s favour and declined to grant the injunctions.

Anthony’s legal team are now considering their options in relation to the High Court.

You will no doubt be aware that within an hour of the High Court decision on Monday 29th September, contracts were signed with the East West Connect consortium. It remains to be seen whether these contracts were made validly, as the cities of Moreland and Yarra have challenged the decision by Minister Matthew Guy to approve the project. If that decision is found to have been made unlawfully, then the contracts will have no validity. That Supreme Court challenge will be heard on 15th December.

This is by no means the end of the Murphy challenge, or of the campaign. Considerable work will have to be done for the trial in the Supreme Court, and the fundraising continues, as the costs will be significant. We would like to say a huge THANK YOU to all our donors to date, who have been so generous in their support. It means so much to Anthony and the legal team to be supported by such committed and generous people.

Your continued support is important and appreciated – please help spread the word!

Heartfelt thanks to all donors so far.

The campaign has now finished, this website is an archived record maintained on behalf of the Murphy v East West Toll team by YCAT